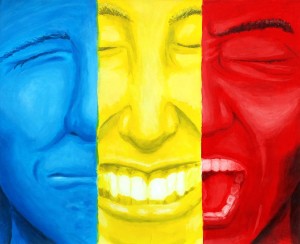 Tribal name: Nazarene.  Tribal mission: Make Christlike Disciples in the Nations.  Tribal values: Christian, Holiness, Missional.  My tribe, the Church of the Nazarene, is typically described as faithful, loving, hard-working people engaged in the mission of God in the world.  However, as we transition further into postmodernity new dynamics are unfolding that are testing the authenticity of our love.

In fact, I believe there is more diversity in the Church of the Nazarene than ever before.  The following may not be a perfect description, but for the sake of communication I want to break the Nazarene tribe down into three groups (Israel had twelve, that must’ve been hard).  The tribal trichotomy of Nazarenedom, and I’m not talking politics, consists of: (1) Conservatives (sometimes fundamentalists); (2) Moderates (sometimes progressives); and (3) Liberals (sometimes processists).  Some may find themselves bouncing between more than one camp, however, they probably spend more time in one or the other.  The demand upon my spirit relates to these groups learning to live together like family.  Let me say that again… FAMILY.

I have two brothers and we could not be more dissimilar.  However, regardless of our differences, we love each other deeply.  I’m the oldest, I tend to be open to new ideas, love to think outside the box, an adventurer of sorts.  My middle brother is laid back, old-school, likes routine, committed to the fundamentals.  My younger brother likes to read Charles Bukowski and listen to whatever music Jack White might be producing at the moment.  My point, we are very different, but we are still brothers and nothing changes that.  Nazarenes are family, and I hope we won’t allow that to change.

The size of each camp within the tribe really doesn’t matter, but for the sake of conversation let’s establish a context.  My guess is that the Conservative group is approximately 70-80% considering we are an international tribe, with fundamentalism not existing across the board.  The Moderate crowd is maybe 15% with some being more conservative and others more progressive.  That means, the Liberal camp, in my estimation would be 5%, and not everyone in this camp would adhere to process theology although it’s influence is felt.  Again, these are estimates for the sake of perspective.

Now, let’s talk practical application.  With the secularization of North America, people are running away from anything that even hints at religion.  In years past “holiness people” have had the tendency to be extremely legalistic.  In this religiously perplexing era, I’d like to offer a few topics to help people identify where various members of our tribe fit into the mix.  The following are listed merely to help you differentiate and identify.

Scripture.  Conservatives (sometimes fundamentalists) have an inclination to read the Bible literally.  If the Bible says Jonah lived in the belly of a fish for three days, they consider it a historical fact.  Liberals (sometimes processists) think the Bible was written by divinely inspired humans.  They prefer to see the Bible as metaphor and are open to multiple interpretations, taking the Bible seriously, but not always literally.  Moderates (sometimes progressives) combine the two approaches.  They’re open to Jonah’s big fish story being accurate, but ultimately are looking for life application: what it means for us now.

Science.  Conservatives believe God created humans in their present form within the past 10,000 years.  The Liberal camp supports scientific method and the teaches that evolution plays a key role, yet reveres God as the source of evolutionary creativity.  Moderates are open to various theological concepts like the Gap Theory and Old Earth Creationism, but they don’t generally see it as an important spiritual issue.

Interestingly, though the differences are vast, the connection remains.  There’s something about Jesus and the 2,000 years of tradition that binds these three dramatically contrasting camps together.  Yes all who say they are followers of Jesus are considered the “Body of Christ.”  And that, at least theoretically, remains true for them even when they are uncomfortable with each other’s viewpoints.

For Nazarenes, we realize that we are not Calvinists, nor are we Universalists.  We are Wesleyans… and that’s where our unity stems from.  No one wants change for the sake of change.  We want change for the sake of mission.  We must refocus on the essentials.  To do that we must stop overemphasizing nonessentials and start extending charitable love where we disagree.  The only way to respect everyone is to recognize everyone as having a seat at the table.

What’s being tested is the authenticity of our love.  And let’s face it, the true test of our love is how well we spend it on each other.  If we can’t do it well with our own family, we don’t stand a chance at extending the family tree.  So, let’s meet in the living room, pull up a chair, and start a new conversation… Someone get the coffee started.