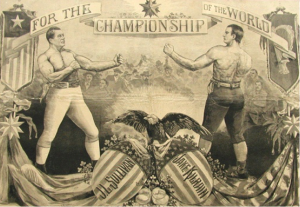 Many years ago there was a great prizefighter by the name of John L. Sullivan. In his day he was the greatest heavyweight champion the world had ever known. There is a story told about one particular fight where Sullivan went up against a guy who was really just a skinny little pip-squeak. The odds of the little guy winning were a 1000 to 1 chance.

In the very first round John L. Sullivan hit the little guy so hard that his entire body shook. In between rounds he went to the corner and the little guy’s trainer asked him “How you doing?” He said, “That first shot I could feel it from the top of my head to the bottom of my feet, but I said to myself, if I could just go one more round.”

Then came the next round and John L. Sullivan hit him so hard that both feet came off the canvass; he fell straight to his back. Saved by the bell, they drug him over to his corner and his trainer asked, “Do you want me to throw in the towel?” The little fighter said, “No, let me go one more round.”

He came out for the third round and this time John L. Sullivan hit him so hard that his eyes were almost swollen shut. When he went to his corner they had to cut his enlarged eyelids with razor blades to let the blood out so he could see. The trainer said, “We better throw in the towel.” But that little determined fighter said, “No, just one more round!”

The little fighter was actually praying that the next punch would be the knockout punch. But the next punch didn’t knock him out, and he kept saying to himself, “If I could just go one more round.” It was the longest prizefight in history up to that time in the late 1800s. The little fighter kept going out again and again, round after round. He simply would not give up. He kept saying, “If I could only go one more round!”

My friends, today we indeed have a John L. Sullivan in our midst. Make no mistake we are in a fight. Our adversary’s name is Satan. He is the great enemy of the human spirit. Let me encourage you that when he hits you and you feel like you’re beaten, regroup and say to yourself, “ONE MORE ROUND!” Just keep going one more round because God is in your corner and the victory is yours.

“Let us not grow weary of doing good, for in due season we will reap, if we do not give up” (Galatian 6:9). Going one more round when you don’t think you can makes all the difference in the world. Don’t quit… Go one more round.

One thought on “One More Round”